Five Faces is a video choreography, in which Van Geffen  investigates the complex layers of shared human experience.Four black and white films in loop, no sound, projected on four black projection screens, hanging at eye level. The spectator can move freely between the screens. Five, three, two and one faces can be seen in succession. Five people of various ages: three women, two men. The faces look directly at the viewer and they show recognizable expressions at the same time; nod yes, smile, nod no, breathe, Their movements are precisely choreographed, they start quietly, evolve to extremes and then start again. New associations and meanings constantly emerge within these known movements.

Gooi- en Eemlander, Margriet van Seumeren: “In the upper room of Corrosia! you can see the video installation ‘Five faces’ with five heads nodding yes. On another screen people laugh and shake no, while on yet another screen a woman breathes hard and then falls silent. You do not hear anything, you only see the images. When you take the time, the video installation makes a deep impression. ”

Moon Saris: “The beautiful work, ‘Five Faces ‘(…) took my breath away and gave air at the same time. Beautiful, but also painful. Delicate, but also terrifying. Paradoxically, exactly what I love because nothing is ever really unambiguous. It appealed to my heart, but also to my head. Every day should contain a portion of this, then you would never allow yourself to take things and people for granted and for granted, and you would reflect daily on the wonder that is called man and life, feeling and thinking.” 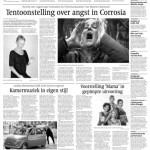